With a painful shock Jesse realized he was leaning against his tree above the lake.

The sun was now high in the sky.  The lake was a still mirror reflecting the blue of the sky.

His body felt heavy.  So heavy in fact that he couldn’t imagine how it would ever fly. Even worse was the loss he felt being left behind in this place that was so familiar yet that felt so strange now.

“Jesse… Jesse…”  His mother’s voice rang again in the distance with an edge of impatience and worry.

“Mommy!… I must go and fetch her.”  He hadn’t meant to make her worry.

“I’ll show her the way to this magic land! Then she won’t be sad anymore.”

He pushed himself up and headed for home.

When he arrived, his mother was not alone.  Several ladies were noisily chattering, their voices intoning indignant stories.

“Mommy…” Jesse started out, hoping she would hear him, “I want to tell you something important.”

The chattering seemed to grow louder with laughter.

Disappointed and hurt Jesse trudged up to his room.  It was no use trying to tell her now.

He had wanted to take his mother by the hand and lead her into the enchanted world of happiness he had just discovered. Together they would sail and soar.  Instead she had shooed him off without a glance.

He remembered the trouble he had gotten himself into when trying to describe the Lady in white.

“It’s no use trying.” He told himself. “She doesn’t believe me.” He crawled under the covers and held that sad thought till he fell asleep.

Later, when his mother checked on him she put her hand to his forehead.  It felt cool.  He had gone to bed without eating a thing and she felt remorseful.

“I should keep him busier and pay more attention to him.  Those dreamy moods worry me. He does look peaceful though.  I wonder what goes on in that mind of his.”

She lingered for a while watching Jesse in his angelic serenity. Gently she kissed him on the forehead.

When her husband returned from work later that night she spoke only of the lady friends and the strawberry pie she had made.

The next morning Jesse woke up early.  Remembering yesterday’s joyful flight he was up and out as fast as he could while being quiet enough not to wake anyone.  He sped to his favorite spot, slid down to lean against his tree and closed his eyes.  He was determined to climb right up those stairs to his magical world. “I’m almost there.” He told himself.

Behind closed eyes he found nothing but his busy tangled thoughts.  He tried to silence them but it was no use.

Wandering home he hoped that at least no one would have noticed he was gone.

“And where have you been so early in the morning?” His mother scolded with a bit of a smile, laying his bowl of porridge on the table and motioning to his seat.

It was not really an invitation to talk and after breakfast Jesse followed her requests to help with the housework and garden.  This seemed to go on for days and even in the moments when Jesse hurried to his tree, nothing happened there anymore.  And then it rained. It was pouring and pouring cold mountain rain.  The trees and plants seemed pleased but as the days stretched into a week and Jesse was not allowed out for more than a few minutes, Jesse was not pleased at all. 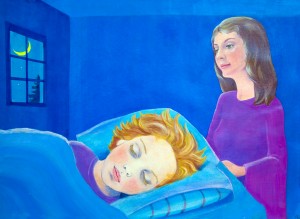 A deep longing fell over him to be back in his world of free flying joy. The memories tugged at him and his heart ached till the tears would roll down his own face as he stared at the raindrops trickling down the window pane.

“Daniel, my friends, how will I ever be able to find the lady in white now?”

That night Daniel came to him in a dream. He was surrounded by great pulsating radiant lights. Joyfully Daniel promised:

“Don’t worry my friend, we will meet again soon.”

It was almost a command, he sounded so sure.

Joke of the day

A not–so–young man and woman were sitting on the porch of the hotel catching a little breeze. The woman turned to the man and said, “It’s really something – you look exactly like my third husband.”

The gentleman asked her, “How many times have you been married?”

She replied, “Only twice so far!”